What Is the Highest Rated Thing To Do In Jackson Hole? We “did the math!” 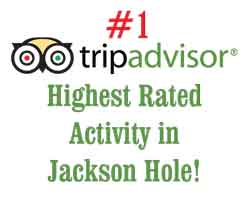 There are dozens of activities, but which one is the highest rated thing to do in Jackson Wyoming?  We turned to Trip Advisor to gather data, and then we crunched it for you!  We only included businesses that have been in business for at least 2 years and that have at least 250 reviews.

Trip Advisor allows up to 5 stars for each review, so of 10 reviews, 50 stars are possible.  This allows us to easily calculate each attraction in Jackson Hole like this:

What is the Highest Rated Thing To Do In Jackson?

Their company one-liner is:

OK, so while they did not fit into the parameters of our admittedly arbitrary study guidelines of being located in Jackson Hole, having been in business for at least 2 years and having at least 250 reviews, a huge amount of respect is deserved by our Honorable Mention, Wild Wyoming Tours.  They have an absolutely PERFECT score with 175 our of 175 ratings being 5-Star!  Who says you can’t make everybody happy all of the time?