I noticed on the news and social media that there were various worldviews regarding COVID-19 and the actions taken by local, state, national and world governments regarding this virus.

I noticed that when some people voiced opinions, they were quickly attacked by the well-meaning opposition. Like Bill Gates’ goal to reduce the world population from seven billion down to five hundred million with vaccines being a valuable tool, or Doctors Dan Erickson and Artin Massihi sharing their data, some of us are so dogmatically attached to our worldviews that we lash out at new or unfamiliar ideas.

I wondered what people REALLY thought, and I wondered, if they could respond without the fear of being bullied, what might we all learn?

Let’s all remember that the 289 people that shared their opinions here, and our seven billion other neighbors are mostly good folks that don’t wish harm on others. We all have different values, and as such, we view the world differently. I believe that 99% of humans are saddened by death, even when it is of old age, self-imposed lifestyle issues, accidents or other causes. We don’t want our neighbors to suffer death.

Let’s be kind and compassionate with each other as we contemplate and discuss the current topic.

Full text of above top-four questions in order:

Continued individual entries from above question:

Descriptions were “cut off” to the left of bar graph, and are as follows:

Full text version of options at top because the bar graph is cut off. 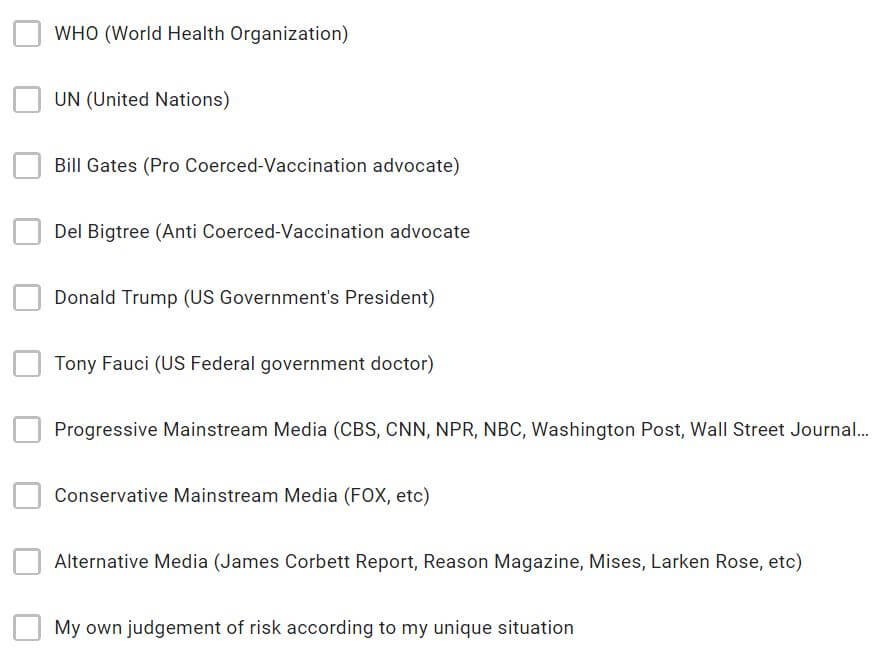 What are 30 or fewer words you would like to add?

The results of this survey do not necessarily reflect mine.