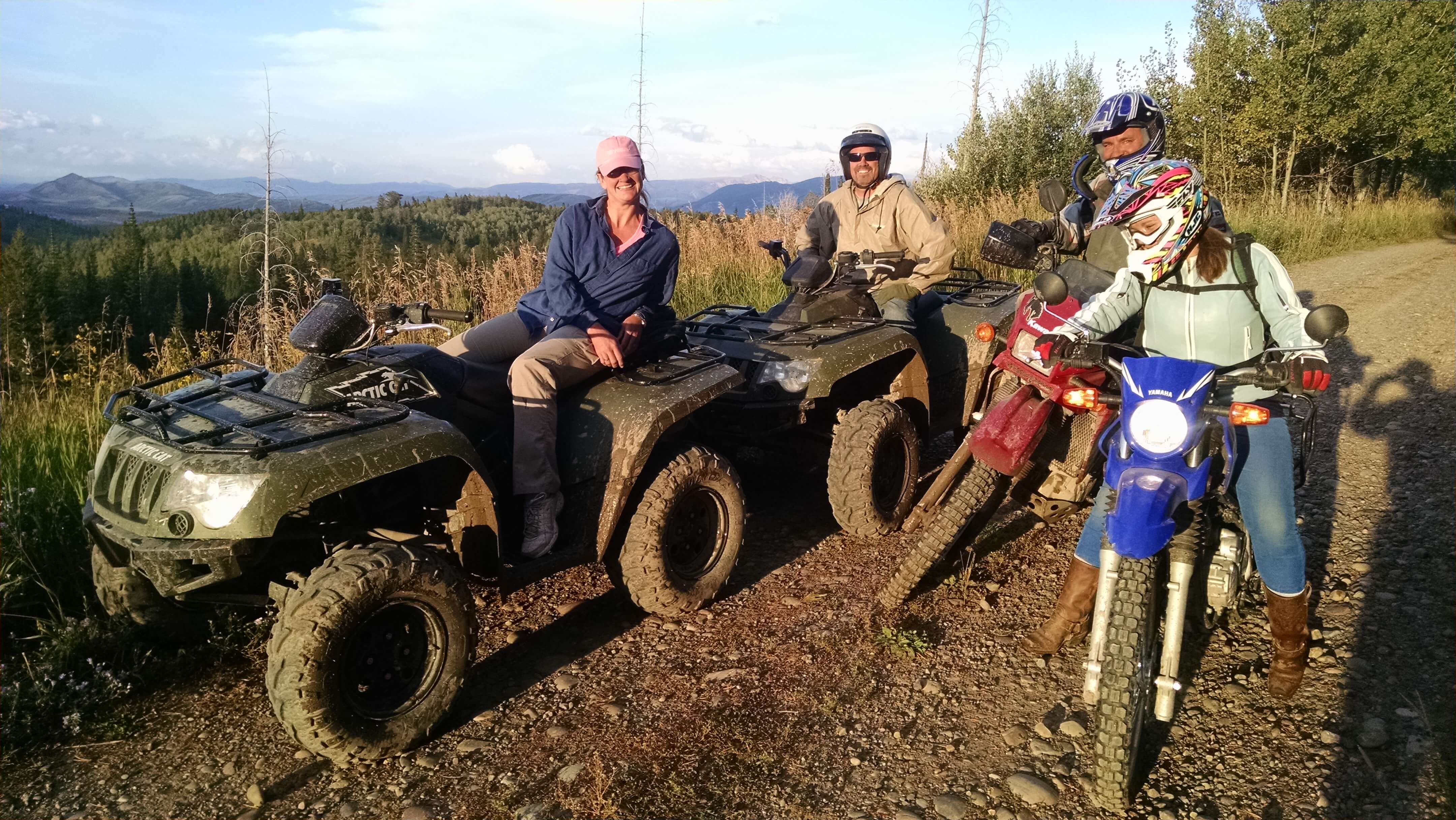 This summer/fall I rented ATV’s from an outfit in Alpine Wyoming and from another in Jackson Hole.  What a fun day we had each time!  It is a bit expensive, but still doable for middle-class folks.  Sure, a private helicopter tour, para & hang gliding, a shooting experience or a hot air balloon ride are great fun and are billionaire’s favorite things to do in Jackson Hole, but ATV’s are a great deal for the fun that can be had in a day!

On the first day, my wife and I were planning our first day off after months of 90+ hour workweeks, and we wanted to relax and get away from phones and stress.  We tried Jackson Hole Recreation in Alpine.  We arrived at 9:01am to pick up our ATV’s and were met by a friendly cowboy that showed us how to use the Yamaha Grizzly 450cc 4-wheelers and gave us an old photocopies map with directions along with complimentary kerchiefs for the dusty roads.  We were told that they did not want us to go up Grey’s River because it was very heavily traveled and the road was wash-boarded, and instead they directed us up McCoy Creek.

Most of the day’s ride was on regular automobile roads that we could have accessed in our SUV, but we found some fun short trails near an old abandoned mining town that allowed us to put the ATV’s in 4×4 low gear and crawl around.  The ATV’s were wonderful, of course not the high-dollar sport style, but we easily cruised around at 30+mph.

We realized that we were low on gas early in the afternoon, so we headed back, arriving about 3pm.  I advise that when you rent the machines, you ask for an extra can of gas to take along.  We only encountered a couple vehicles the whole day, which was wonderful.  Definitely bring a sack lunch along.  We did so and found a grove of trees to park under and eat, then tossed a tarp down to take a nap while watching the cloud formations pass by.

We had a great day, and would have loved to explore for a couple more hours.  As I learned below, the riding int he Gros Ventre area is more interesting, but I will definitely be back to visit Jackson Hole Recreation again!

In early September, I rented two machines so that my visiting friend Mark from California and I could spend a day exploring Union Pass.  I chose Jackson Hole Adventure Rental (JHAR) and spent the extra $25 per Arctic Cat 500cc to pick them up at 530pm the evening before, which was a great option!  We even joined some friends for a quick 1-hour ride up Mosquito Creek that evening.  Later, over a meal at Calico, we discussed what time we would have to leave Union Pass the following day to be sure we could make it back to Jackson by the 5pm drop-off deadline.  We realized we would not get enough riding in, so we decided to check out the Gros Ventre mountains instead.

We arrived at Slide Lake a bit after 7am and unloaded the machines, which was easy using the ramp provided (complimentary) with the trailer  by JHAR.  We headed up Gros Ventre River road, exploring little cutoffs and generally having a great time.  (Be careful with the Arctic Cats, as there is a steering “issue” in which negotiating a turn requires only a few pounds of steering pressure, but then suddenly the power steering seems to “go out” and 40+ pounds of pressure is needed to turn, then suddenly the power steering seems to kick back in and the turn is easy.)

We took the road to the end, past where the Taylor‘s Gros Ventre Wilderness Outfitters outfit is.  I recalled this old ranch at the end of the road from my youth in the 80’s when I would visit Paula & Donnie (RIP) Calhoon with Paula’s father Ross (RIP) Berlin.  It is a beautiful remote location, and beyond this point is Agenda 21 “Wilderness” land.  We went back a few miles and checked out Soda Lake, where trout can be seen swimming near the shores.  My pal did some photography, and we again hit the trail.

We crossed the Gros Ventre River across from Soda Lake and checked our some neat river bottom areas, and a canyon that offers an ATV only trail.

We were nervous about getting back on time, so after a bit of exploring, we headed back to our car, getting some great pictures along the way.  The Gros Ventre area has much more to offer, and I will be back to explore!

A couple weeks later, I just had to take my wife up to share the beauty.  We again rented from JHAR, this time picking up the machines at 9am.  We were headed out by 9:15, and were unloaded at Slide Lake and on the trail at 1030am.  We went directly to Soda Lake and fished for about an hour, then began to be concerned about getting the ATV’s back on time, so we had a quick lunch and left the beautiful Soda Lake.

Return times were tough.  From about 1pm, our minds were on making sure we had the ATV’s back on time.  All of our rides were much shorter than we would have liked due to our stress of getting the ATV’s back on time.  I would love to see a company offer an option to return machines “the morning after” by 7am or 8am for an additional fee.  It was a great option offered by JHAR for only an additional $25 to pick the machines up in the evening.  We really wanted to take ATV’s to Union Pass near Dubois Wyoming, but that would only be worthwhile if 7am to 8pm was spend on the trail.  This offering would require changed washing/mechanicing hours, but I for one would have paid for it!  🙂

The JH Adventure Rental Arctic Cat machines were sluggish and didn’t handle as well as the Grizzly.  JHAR also offer side-by-sides, but at over 6’2″ and 290lbs, it looked like leg room would have been tight in both with knees banging against the sides.  We would have paid a bit more for better machines than the Arctic Cat 500’s, we loved the Grizzly machines from Alpine.