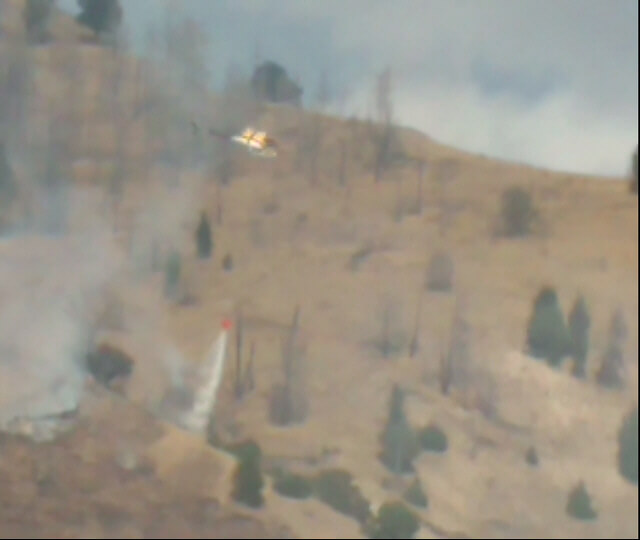 Between 3 and 4 p.m. on September 9th in Jackson Hole, a forest fire started at the outskirts of the South Park industrial center area.  This several hundred acre fire is being called the “Wilson Canyon Castlerock Fire.”

Many businesses including Castlerock Rocky Mountain Yeti auto dealership and Jackson Hole Shooting Experience call this area their home. It is not yet known exactly how the fire started, however it appears that it was from an old fire truck that was being jump-started started the fire.  Irony.

Fire Crews from around the Jackson Hole area responded immediately including a helicopter Airship which did bucket drops of water with absolute precision!   Brad Wolf, an owner at Rocky Mountain Yeti, said that while flames looked scary in pictures, his auto dealership was not at risk.  “With the caliber of fire department professionals in our community and some help from light winds in the right direction, we are fine” said Wolf.

Long Range Precision shooter and owner of Jackson Hole Shooting Experience Shepard Humphries filmed the below video and can be heard complimenting the pilot in the background for a “nice shot!”  The water dropped right in front of the progressing fire.

Fires are currently raging across the Rocky Mountain West and the Pacific Northwest. We are very fortunate in Jackson for the fast response and easy accessibility to the location. Our firefighters worked quite hard climbing up the steep hills in very difficult conditions, thank you so much folks!

Because of their fast and professional action, this fire was brought under control before it could spread and endanger the town of Jackson or area businesses. The winds blowing from west to east were also helpful as winds blowing the opposite direction could have spelled disaster for the businesses inside the South Park industrial area.  Another nearby business, Green Turf Lawnscapes was yet another irony.  Had the mountain grass been green, well…

Jackson Hole community leader Shepard Humphries said that his staff is fine.  “The fire was never a danger to our business location.”  Shepard said that he has known fire department leader Kathy Clay for years and that she and her team were absolute professionals, “We are so happy to have them serving our neighborhood” Humphries said.

A local newspaper has more here.

Author: ActivitiesinJacksonWy
Filed Under: About Jackson Hole
Tags: Forest Fire in Jackson Hole September 9 2017
Recommendations for Things to do in Jackson, WY by Ted Kerasote
THE UPS AND DOWNS OF STARTING A BUSINESS IN JACKSON HOLE